“It was a dark and stormy night…”

How many of our Halloween stories begin this way? Even though many people tell such stories for fun at Halloween–even if they’re a bit scary!–for others, fear characterizes their daily lives.

Voodoo practitioners are not myths or stories in West Africa–they are all too real. The spirits 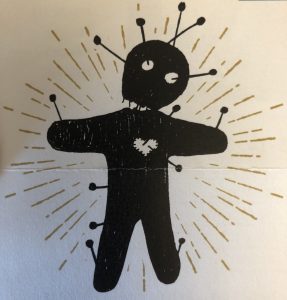 they seek to manipulate and placate with their magic spells and rituals are real also. Jesus recognized the reality of the spirit world when he said in Matthew 12:28, “But if I cast out demons by the Spirit of God, then the kingdom of God has come upon you.”

Parfait Mitchai, who works with StoryRunners in Benin, is the son of a voodoo high priest. As he was being groomed to succeed his father as high priest, he learned how to harm others with voodoo practices and spells. But he couldn’t protect himself from others who might practice voodoo against him. He was afraid of death from those who might try to harm him…until he heard the story of Jesus’ resurrection.He thought to himself, “If Jesus rose up from death, if I can be His friend, He can take care of me. Realizing the power of Jesus, Parfait put his faith in Him, and the next day, his fear of death had vanished!

As Jesus cared for him, Parfait learned to trust Him. Graduating first in his class in physics, the top student in all of Benin, he continued to trust God, who called him to join Campus Pour Christ (as Cru is known in West Africa). After joining the ministry, he eventually became president of the ministry in Benin. He regularly met with government officials, praying for them and advising them in spiritual matters. However, after Parfait attended a StoryRunners training in 2011, he resigned from leading the ministry in Benin in order to work with StoryRunners full time.

He always exclaims with a smile on his face, “Benin is a country shaped like a little key. It is the key to all of Africa, and stories turn the lock!”

No Barriers to the Gospel

Pass On What You Have Learned